Click Here to View Mike's New Platform FrankSpeech.com
Close
Save 30% With Promo Code!
Be the first to review this product
As low as $40.00
Vanessa Satin Print
Skip to the end of the images gallery

Skip to the beginning of the images gallery

Satin prints are printed on a heavy stock paper with a satin sheen finish. The professional finish allows the print to be admired from all angles without a reflective glare. We take special care to air pressure dust each print before attaching a black backboard and sealing in an acid-free sleeve. This ensures the protection of your art during transportation.  These prints are beautiful, affordable, and are standard sizes ready to be framed and hung on your wall.

Out of the ashes she arises, with strength and dignity as her clothing... She smiles at the future, without bowing to fear, stepping into her purpose and destiny. The future is hers to take hold of, to walk into, without limits. She is fierce, she is beautiful, she is strong, she is capable... She speaks up for those who cannot speak for themselves, ensuring justice for those being crushed. Love doesn't hold its tongue, passion doesn't bow to what others think. She looks fear in the face and knows her name. She is distinguished for integrity, justice and right standing with God. Written by-Cindy Brannon. 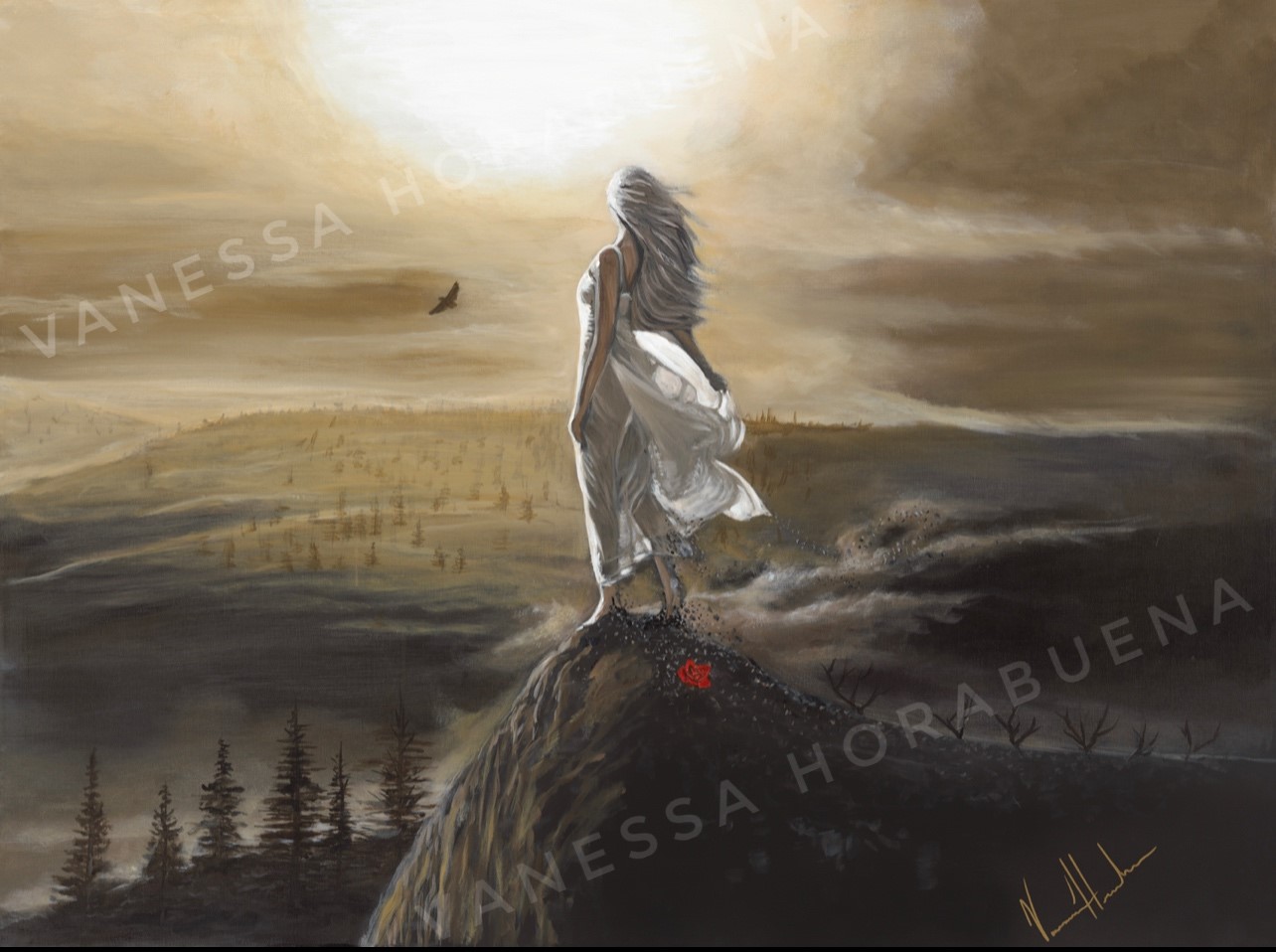 Compassion of a King 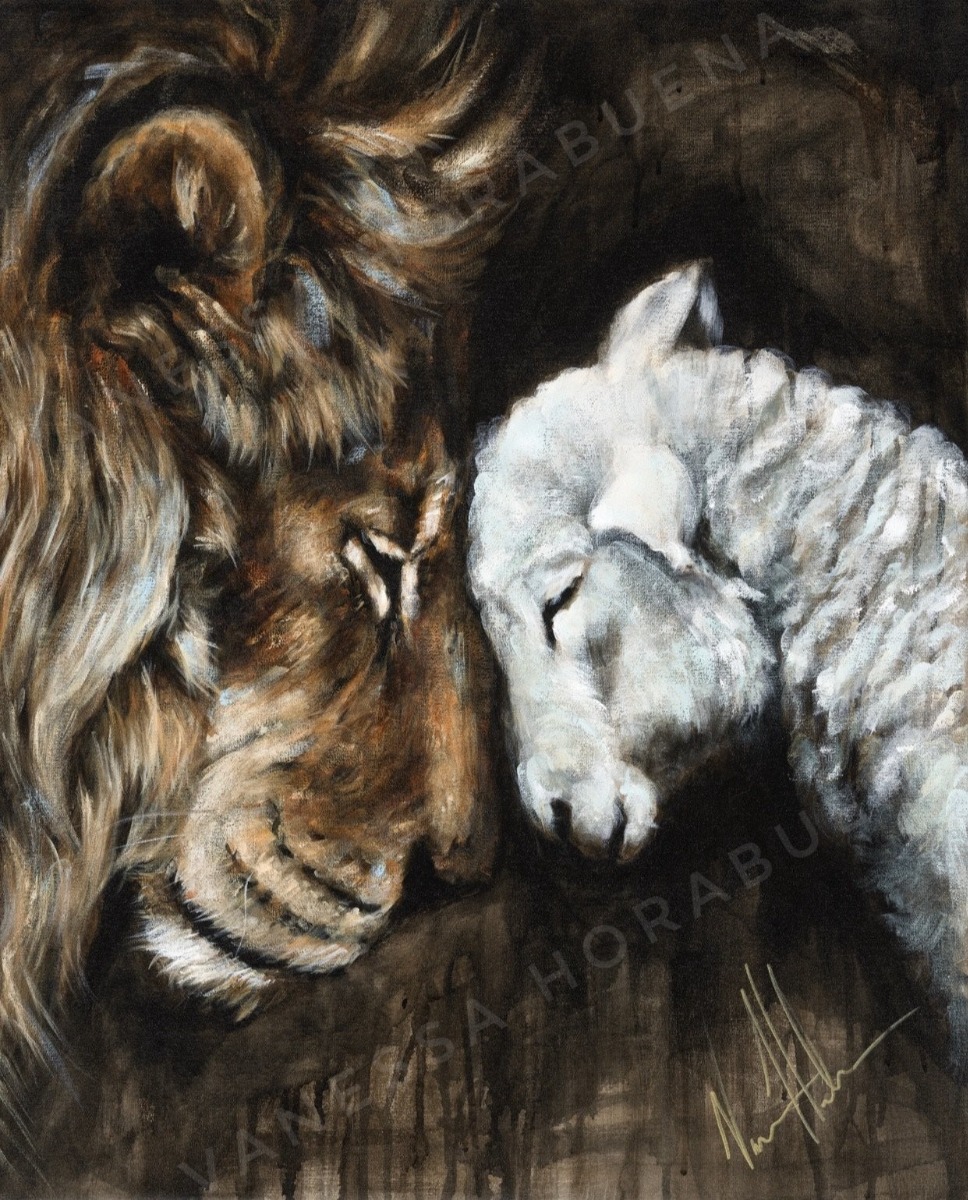 The light of the Father shone through like the sun, His love radiated the world. The heavens shook, as the barrier between man and God was broken. The power of the cross and the redemptive sacrifice of the Son made a way for all. For the least of us, for the lowest of mankind, those who never stood a chance, He paved a way directly to His heart. Those despised, the poor, the sick, the injured. His light, His sovereign love, broke all chains. He did this so that His power, His righteousness, His peace, would be available to those who believed. Not one was worthy, not one good enough, never the less He paid it in full, the ransom for all. Just so that we may know, and be One with Him. You are worth it to Jesus! 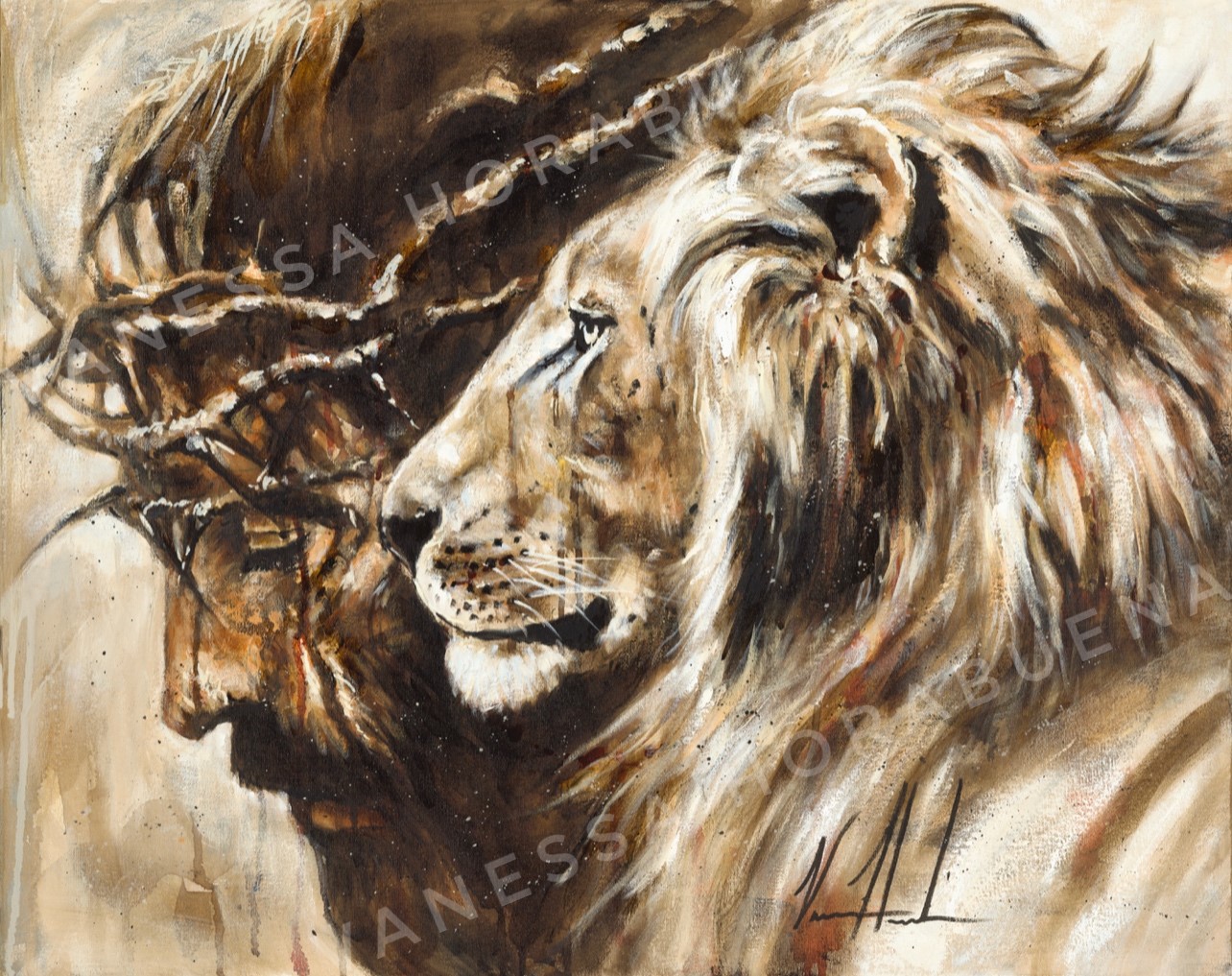 This piece speaks to the intimate relationship we can have with our God and King. His gentleness and strength. His strong presence and incredible authority. He is mighty, yet so kind, He is powerful, yet the safest place for us is to be near to Him. 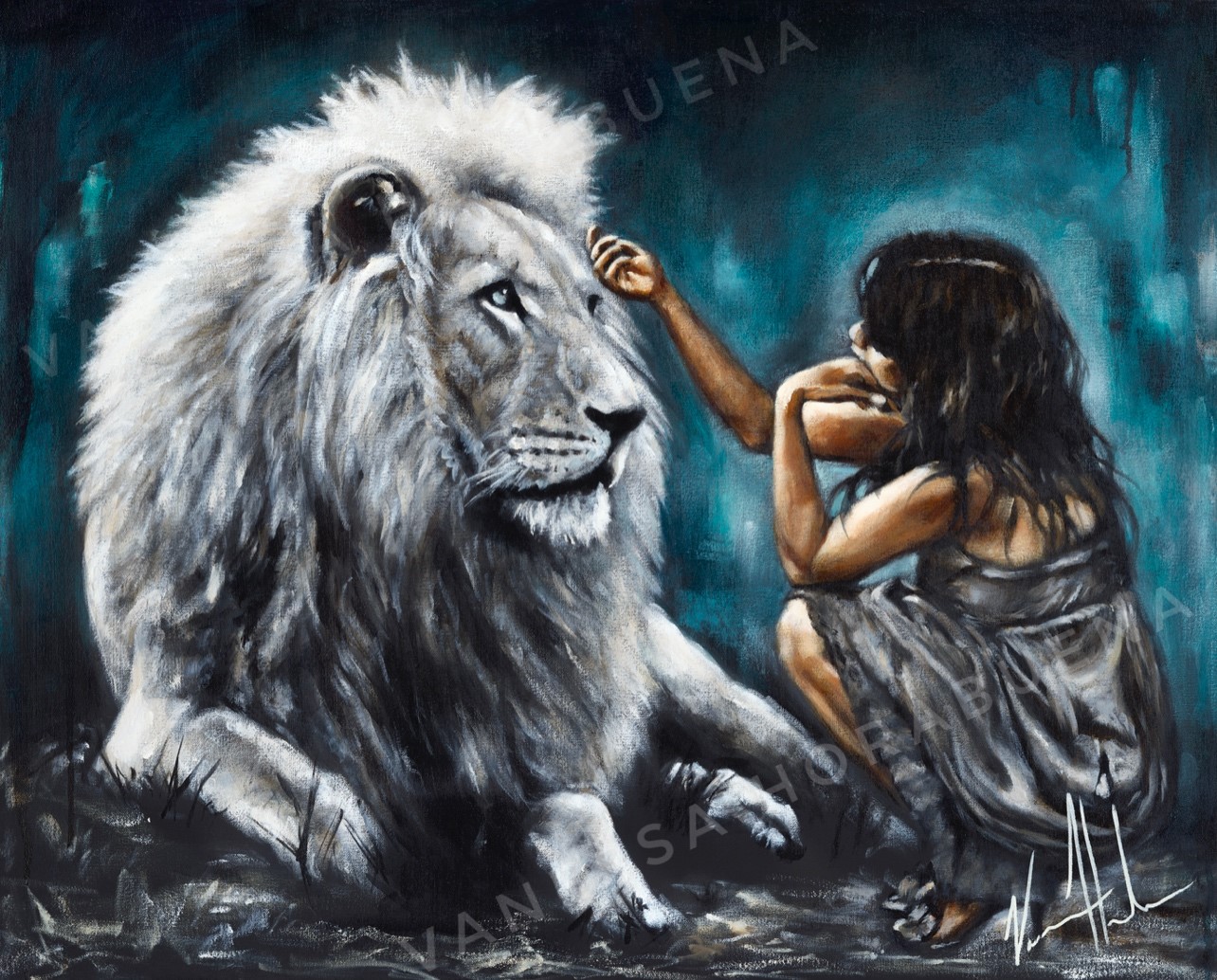 The Lion of Judah

“Then one of the elders said to me, "Do not Weep! See, the Lion of the tribe of Judah, the Root of David, has triumphed. He is able to open the scroll and its seven seals." -Revelations 5:5 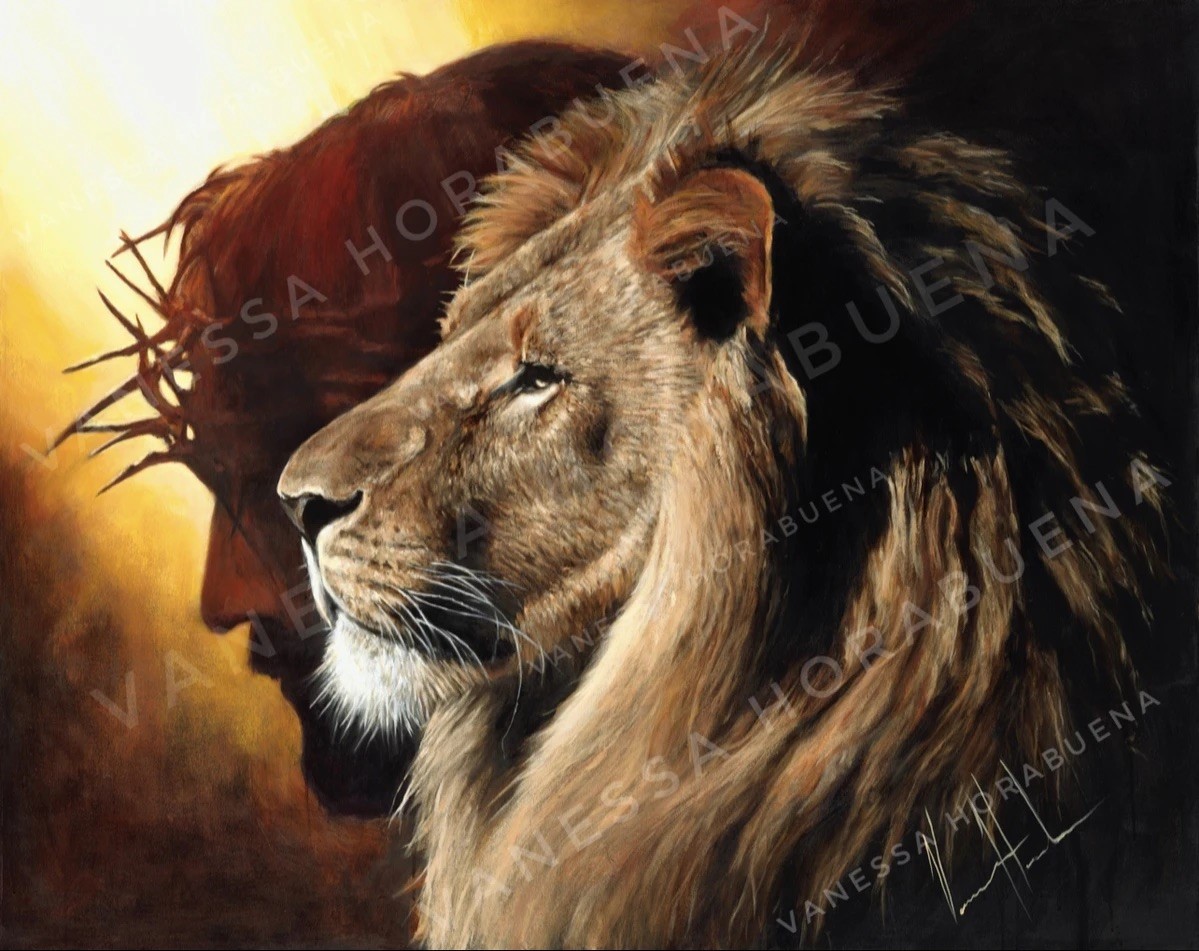 The Lion and Lamb Passover

The strong, powerful, mighty lion of Judah...and the meek, the gentle, and the innocent lamb of God. Both of these represent two aspects of Christ...and both of them shown through as He died on the cross for the sins of the world. It was His strength and His meekness, His authority and His innocence that shut death’s doors for you and for me. May this painting encourage you today. The Lord is fighting your battles for you. 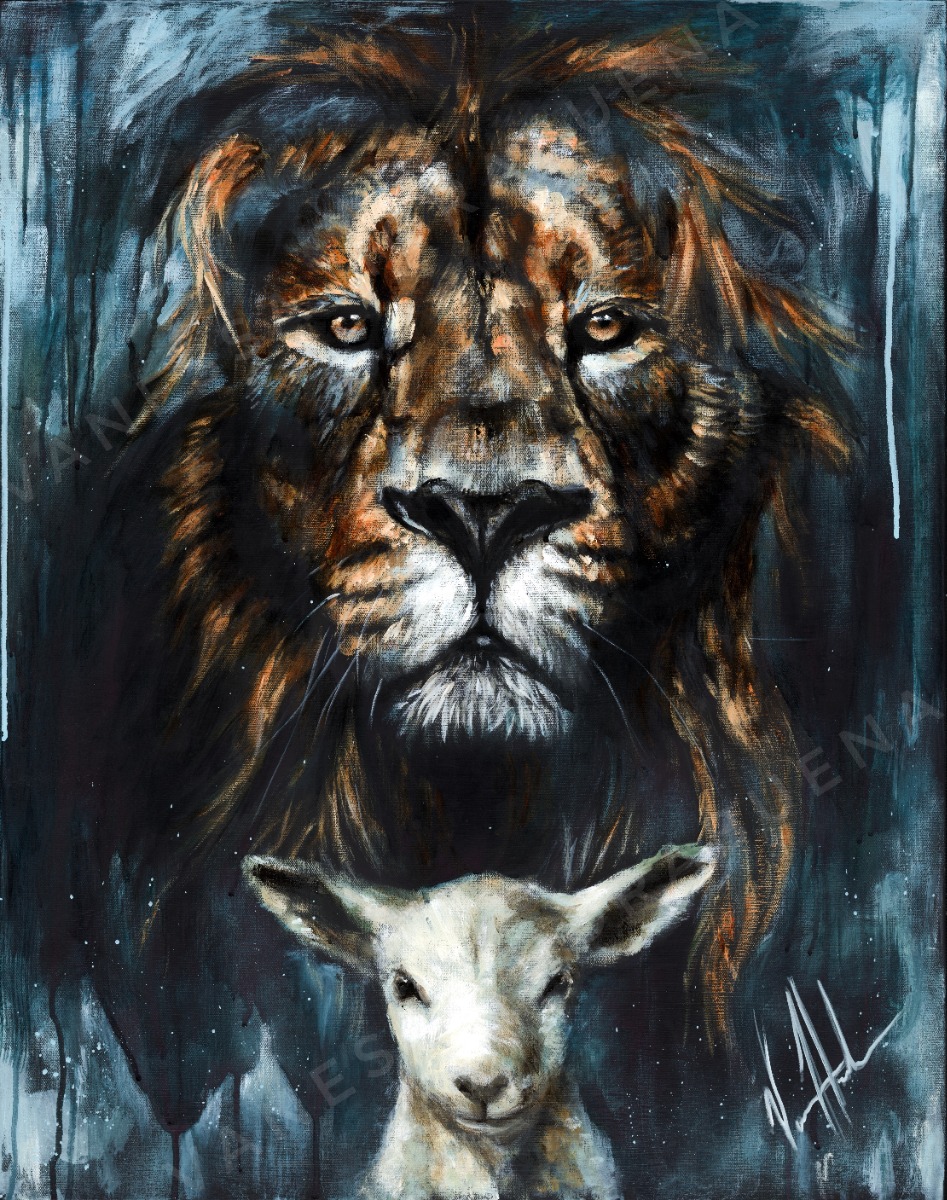 My Sheep Listen to My Voice 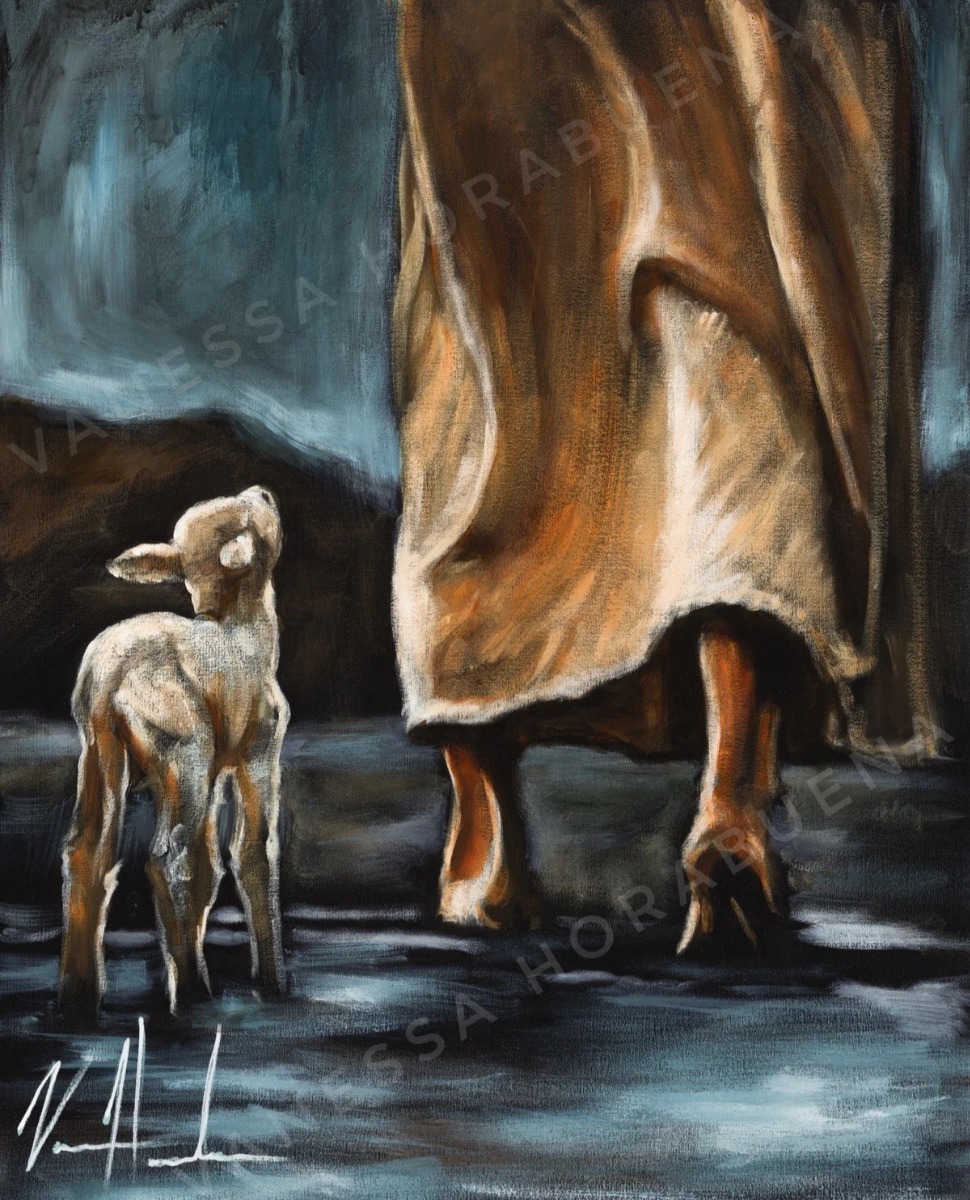 A few months ago, I was praying in the morning…and clear as day I saw A vision of Jesus. The Word of God was opened and he was walking out from the Word of God. I heard the words…”He is the Living Word.” It was so impactful, so I went straight to the drawing board searching for images to capture the vision the Lord showed me. Within 20 minutes I had completed the digital reference of what I saw. And finally, months later, I have finished this beautiful painting. I can get lost in this piece. Something about it speaks straight to my soul, it’s as if the truth of what this piece speaks, is so powerful, that to take it in, is to be transformed and drawn more and more into who Christ is. 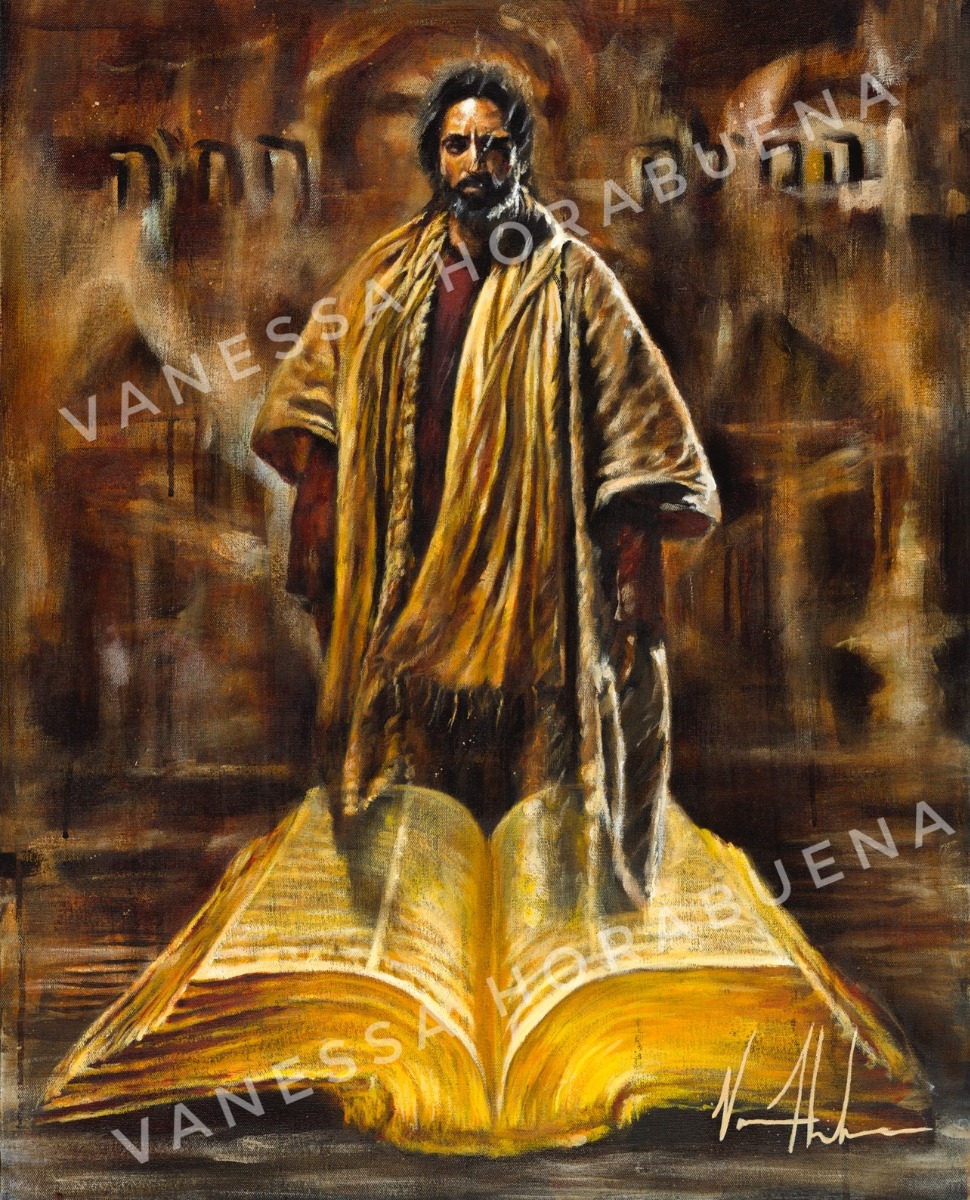 For The One Who Lost Its Way

Leaving the flock, He followed the trail of the one who lost its way. As He drew closer. Thorns pierced him, the branches lashed Him, but He did not yield to the struggle nor the pain. He pressed on after that little lamb...Finally, He saw the top of the Hill where the little lamb was...lost and alone. He mustered up the last of His strength and climbed to the top of the Hill called Calvary...He removed the little lamb from the jaws of death and for a moment held it, the journey was worth it. One last embrace before He would lay down His life on that cross. As the nails were pounded into His hands, and then into His feet. He committed His life to the Lord. He did it for you...He did it for me. He did it all, to embrace the one who lost its way. 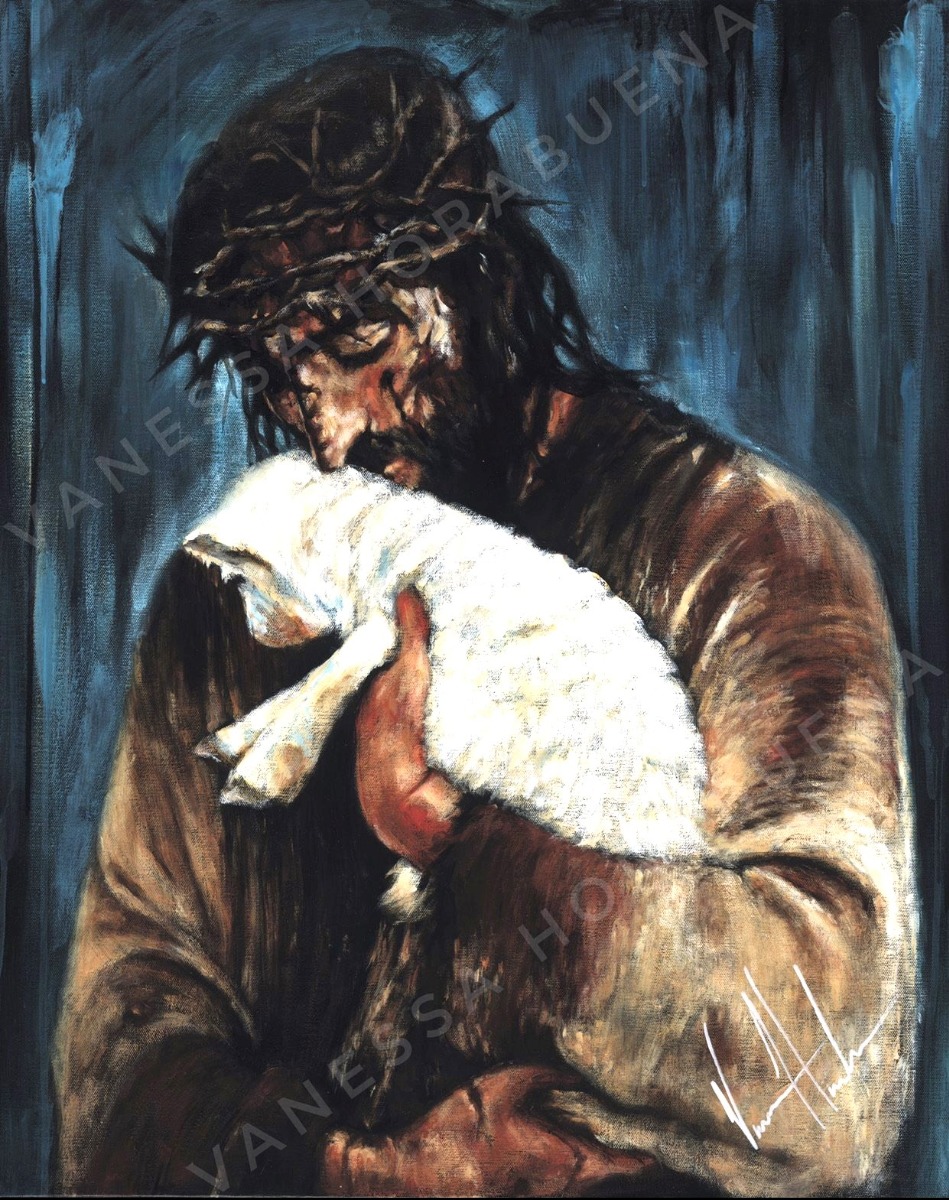 Watcher Of The Sparrow

"Are not two sparrows sold for a penny? And not one of them will fall to the ground apart from your Father. But even the hairs of your head are all numbered. Fear not, therefore; you are of more value than many sparrows."-Matthew 10:29-31 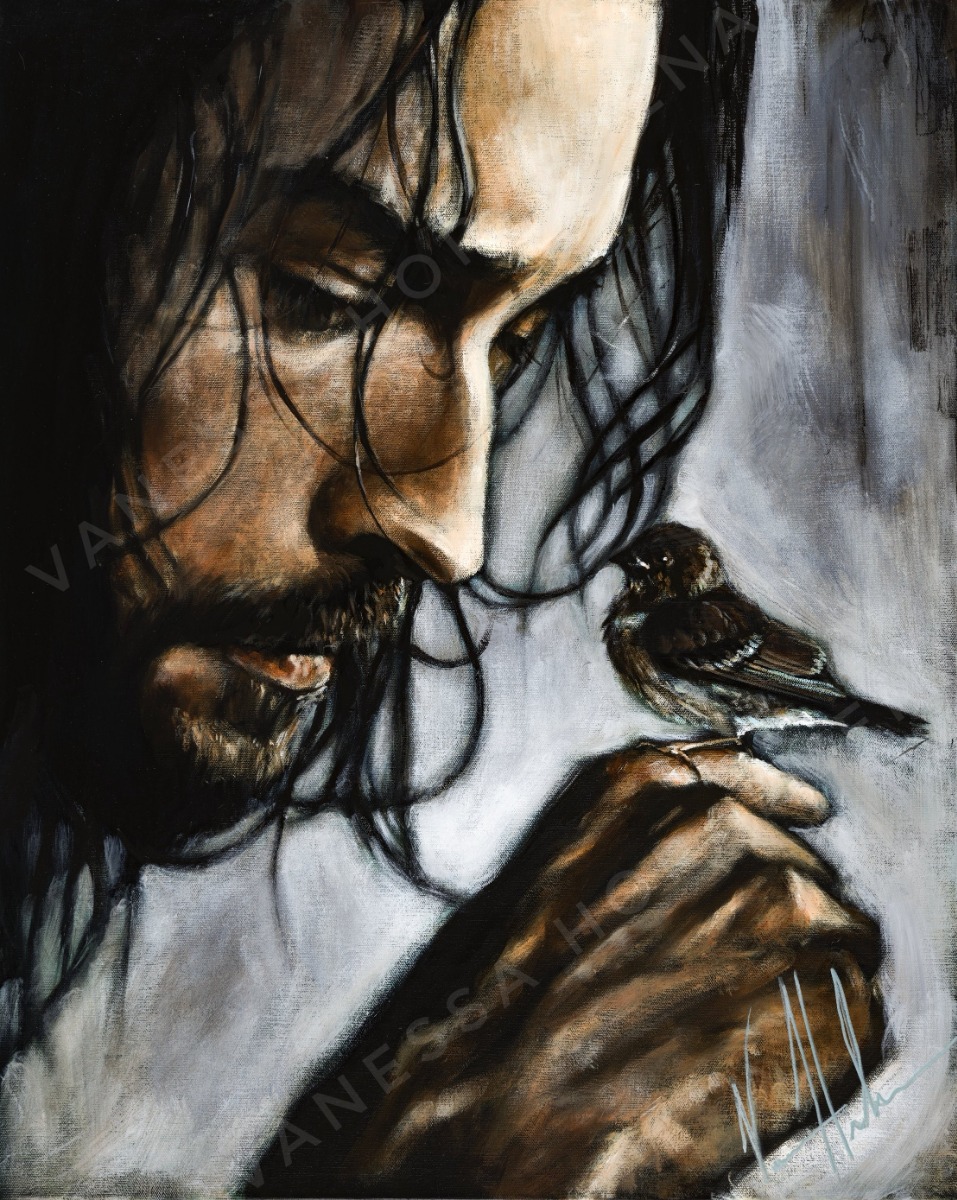 Save 30% With Promo Code!
Write Your Own Review