OHMAN DECLARATION OF INDEPENDENCE AND US CONSTITUTION SET

High-definition lithographic reprints of Theodore Ohman’s original masterpieces which he first printed in 1942 (The Declaration of Independence) and 1953 (The U.S. Constitution)

Skip to the end of the images gallery 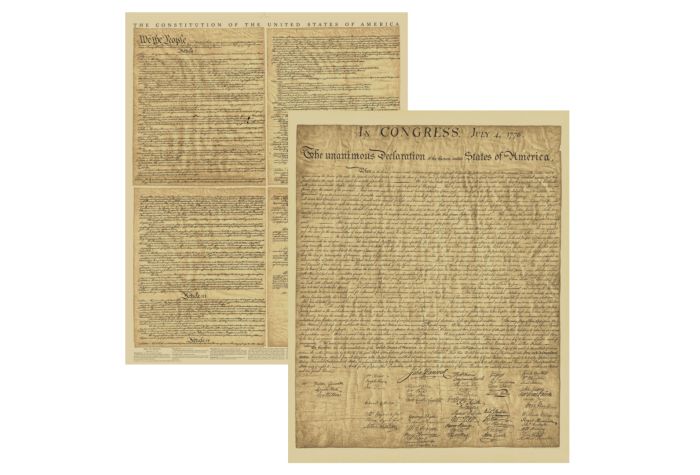 High-definition lithographic reprints of Theodore Ohman’s original masterpieces which he first printed in 1942 (The Declaration of Independence) and 1953 (The U.S. Constitution)

Ohman Lithographs of The Declaration of Independence and U.S. Constitution

This stunning facsimile of the Declaration of Independence was created in 1942 by Theodore Ohman, a third generation master lithographer who emigrated from Bohemia to the United States at the age of 20 in 1912. As a young boy, he learned about the Declaration of Independence by a brave teacher who taught her students about American ideals, even though that was strictly prohibited by the Austro-Hungarian Empire. Ohman eventually became a U.S. citizen and traveled to Washington D.C. to gaze upon the document that stirred him so deeply as a child. His thrill at the sight was tempered by his shock at discovering that this immortal document had been permanently damaged. At that moment, he resolved to create a lithographic reproduction of how the Declaration of Independence looked at the time it was signed by America’s founding fathers.

He re-created the script from a William Stone print which he purchased at great cost. In 1820, Stone was commissioned by Secretary of State John Quincy Adams to engrave an exact copy of the Declaration of Independence onto a copper plate. It took Stone 3 years to complete his work. In 1823, he printed 200 copies from the engraved plate. It was one of these original Stone prints that Ohman purchased and used to create the script. He then turned his attention to the background of the document. He discovered that the Declaration was photographed outside its case in 1903. He found and purchased a set of these negatives, which allowed him to re-create the background in exact facsimile.

In 1942, after years of effort, Ohman finally created his first lithographic prints. He referred to his work as “Ohman’s Authentic Restoration of the Declaration of Independence.” His amazing story, written by Ohman himself under the pen name Walter O. Mahan, can be read here. (Link document titled Ohman Original Pamphlet 1942).

Several years later, he began the painstaking task of creating a replica of the U.S. Constitution that matched the size of his exact replica of the Declaration of Independence. He finished his work on the Constitution in 1953 and printed 10,000 lithographs that same year.

These prints of our nation’s founding documents are not only the most beautiful ever created, but they were created at great expense by a man who deeply understood and completely appreciated the significance of the term “The Land of Freedom”.

Now more than ever, we need to re-establish the ideals embedded in these two documents. There is no better way to do that than to display them proudly in your home, your place of worship, your place of work or anywhere else for that matter. In fact, the reason we include the small prints is because they fit perfectly on university dorm room doors.

Order a set of Theodore Ohman’s masterpieces today and let the world know that you’re proud to be an American!

Write Your Own Review

©2022 MyPillow. All right reserved. MyPillow® is not a medical device and is not intended to diagnose, treat, mitigate or cure any disease.